Phenotypic variation exists even in clonal cell populations that are derived from a single ancestral cell [1]. Such variation is interesting from a medical perspective as it can create subsets of the population that behave differently compared to others (e.g. some cells may develop resistance to drugs [2]). Quantifying dynamic changes in variation and thus, cell fate, requires individual cells to be tracked at high spatial and temporal resolution.

Some live cell imaging techniques (e.g. high content imaging) do allow to track individual cells through time, but they also require cells to be fluorescently-labelled, which generates phototoxicity, imposing limitations on either the duration of the experiment, or the frequency of imaging during an experiment.
Nanolive imaging is not fluorescence-based, which avoids these limitations. Our microscopes measure the cells refractive index [3], an intrinsic material property of the cell. This permits to monitor cells at high frequency for unlimited periods of time, without compromising spatial resolution. This is advantageous as it allows to follow the state, behaviour, phenotype and function of single cells at the population level.

In the Feature Application entitled Characterizing Single Cells, we showcase the enormous potential that Nanolive live cell imaging holds for single cell characterization. In the first case study, we analyze micro-heterogeneity at the population and the temporal level in unperturbed cells. We present this case here below. The following case studies can be accessed downloading the application note document here.

We hope this application note will inspire researchers to revolutionize their research using Nanolive cell imaging and improve single cell analyses by capturing the full complexity of time-varying cell states and the interconnectedness of cell subsets within a population context.

An unperturbed population of 3T3-derived pre-adipocyte cells were imaged for 90 h using the 10×10 grid-scan mode on Nanolive’s CX-A (one image taken every 8.5 mins; for details, see Video 1 and Image 1). Resulting images were subjected to a maximum intensity Z-projection, segmented and quantified using protocols developed in house.

Unperturbed 3T3-derived pre-adipocyte cells label-free live cell imaging for 90h: original refractive index images, and corresponding segmentation masks and cell count and confluence graphs. Confluence increased ten-fold over the course of the experiment from 6% (74 cells) at the start of the experiment, to 60% (521 cells) at the end.

Six metrics (cell area, perimeter, compactness, extent, dry mass, and granularity) were calculated for each cell, at every time point (150650 cells). The resulting data was visualized as relative frequency histograms, which measure the micro-heterogeneity in a population and allow to compare the variance that exists between traits. Cell area (A), compactness (B), and dry mass (C), are shown in Video 2.

All traits were highly variable and positively skewed. This could be an artefact of the analysis as time is unaccounted here. More complex statistical models could be used to compare histogram distributions over time, or to calculate the relative contribution of each trait to the observed phenotype.

The data can also be used to examine the response of large populations of cells over time. The graphs in Image 2 show cell extent and compactness over time, first as line graphs showing the mean ± standard error (SE) and then as the co-efficient of variation (CV).

Quantification of the extent, compactness, and coefficients of variation of both measures for the dataset of unperturbed population of 3T3-derived pre-adipocyte cells images for 90h.

3. What causes phenotypic variation at the population level?

Measures of area, compactness and dry mass in unperturbed individual pre-adipocyte cells imaged in a separate set of experiments, for 1 h using the 3D Cell Explorer-fluo (one image taken every 6 secs). 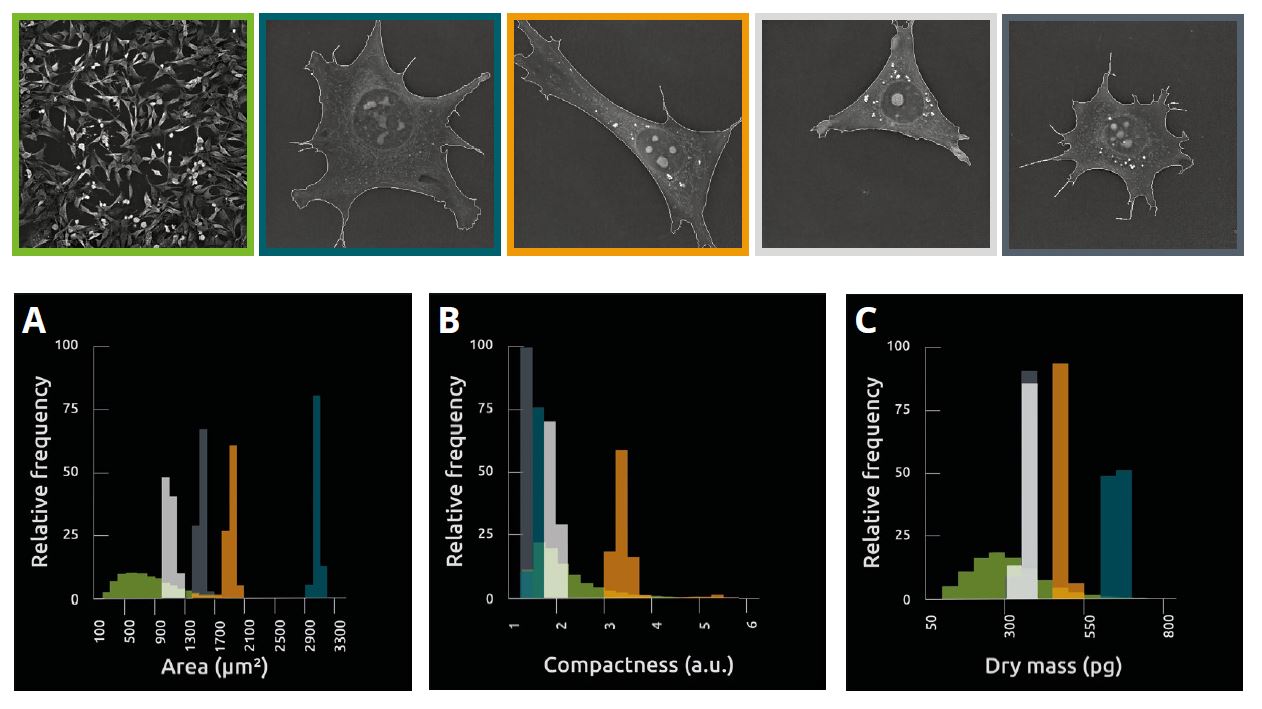 Measures of area, compactness and dry mass in unperturbed individual pre-adipocyte cells imaged in a separate set of experiments, for 1 h using the 3D Cell Explorer-fluo (one image taken every 6 secs).

Although phenotypically different, isolated single cells are less variable than cells at the population level (A, B, C), which suggests variability at the population level is influenced by extrinsic factors, most likely cell crowding, as cells must adapt to an increasingly limited space. This approach provides a means of testing the mechanistic basis of phenotypic variability. 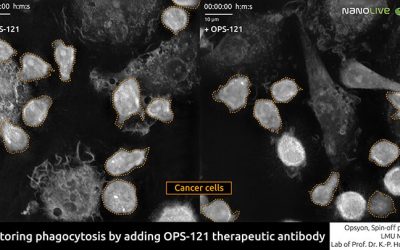 Nanolive imaging validates antibody efficacy in the fight against cancer

What is the role of macrophages in the immune response? Macrophages are a type of white blood cell present in our innate immune system. They are specialized effector cells that detect and destroy harmful pathogens (e.g., bacteria or viruses), as well as diseased and... 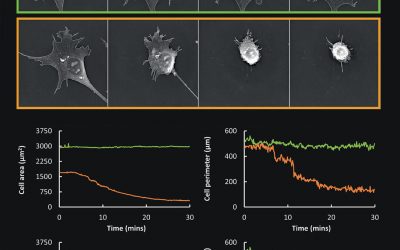 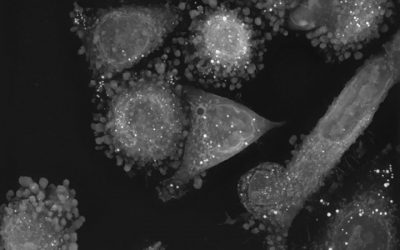 Lung cancer: the world's deadliest cancer The World Health Organization (WHO) reports lung cancer as the most common cause of cancer death in 2020. It is estimated to have caused 1.8 million deaths worldwide, 85% of which, were classified as non‐small cell lung...