PIZZA & SOFT DRIKS WILL BE PROVIDED

A single HepG2 cell was visualized in three-dimensional 3D holographic and tomographic microscope. While the cell is alive, it was digitally stained according to the values of each component’s refractive index. A micromanipulator was connected to the body of the microscope by a common base plate, a 1um internal diameter Nanospray tip was attached to the micromanipulator which was used to suck out the content of the single HepG2 cell that was monitored in 3D. Volume analysis was carried out by means of 3D holographic image analysis and the volume of cytoplasm, nucleus, endoplasmic reticulum, and a single granule was calculated. Moreover, a 3D image was taken of the cell before and after suction of the cytoplasm and nucleus to determine the exact volume by the Nanospray tips for later quantitation. Target molecules were chosen per their specific site in the cell and Nanospray tips were used to take samples from the cytoplasm and the nucleus. Each concentration was calculated only in the volume taken from the cell. 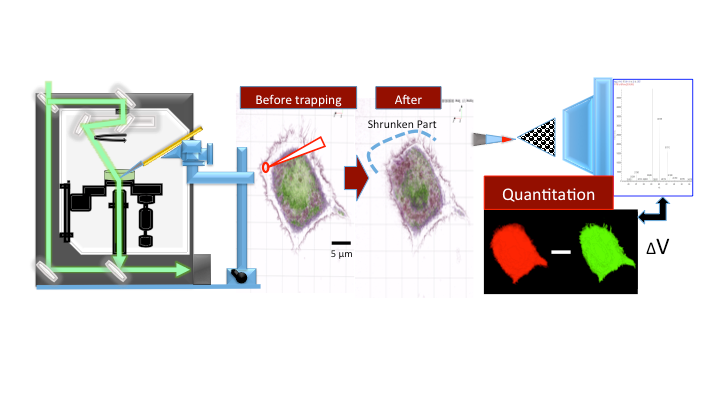